The Appointment Letters to Dr. Markandey Rai and to Dr. Utkarsh Sharma for being appointed as the Chancellor and Pro Chancellor respectively for the Indira Gandhi Technological and Medical Sciences University (IGTAMSU), Ziro, Arunachal Pradesh were issued and presented in the presence of all the staff members of the University at its Headquarters at Ziro. 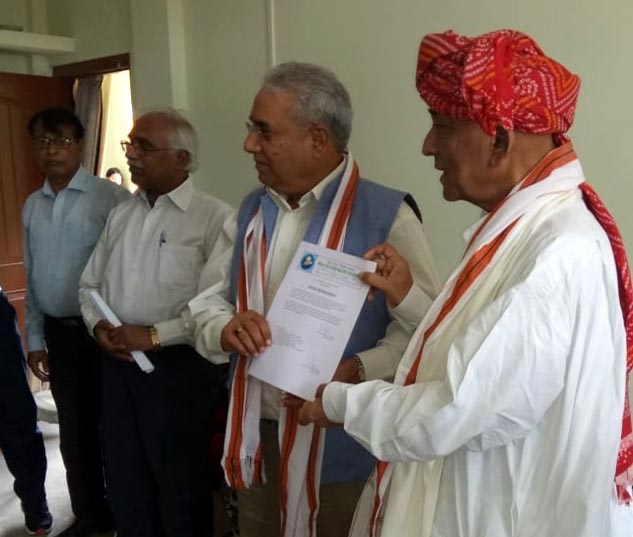 The Appointment Letter making Dr. Markandey Rai as the Chancellor of Indira Gandhi Technological and
Medical Sciences University, Ziro, Arunachal Pradesh being presented to him in the University Campus at Ziro
by the Founder of the University Dr. Priya Ranjan Trivedi.

After taking oath in the university campus at Ziro, they jointly issued a press statement where they had shown their full commitment for making this University a world class institution of excellence by inviting teaching and research faculty from all over the country with a view to strengthening the cause of tertiary education by vocationalising the existing careers of the boys and girls from all over the world in general and those from Arunachal Pradesh in particular. 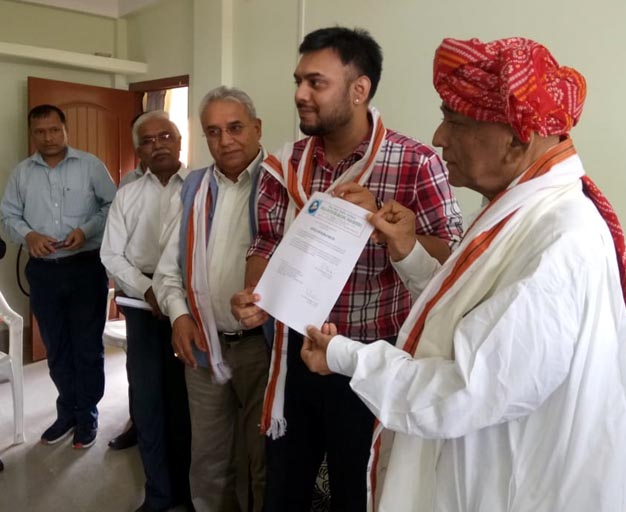 The Appointment Letter making Dr. Utkarsh Sharma as the Pro Chancellor of Indira Gandhi Technological and
Medical Sciences University, Ziro, Arunachal Pradesh being presented to him in the University Campus at Ziro

by the Founder of the University Dr. Priya Ranjan Trivedi.

In his welcome address, the Vice Chancellor Prof. Dr. Arvind Kumar assured the newly appointed Chancellor Dr. Markandey Rai and Pro Chancellor Dr. Utkarsh Sharma for all possible cooperation and coordination for optimising the available resources of the University. He also added that he will also focus on applied researches with special reference to Arunachal Pradesh. 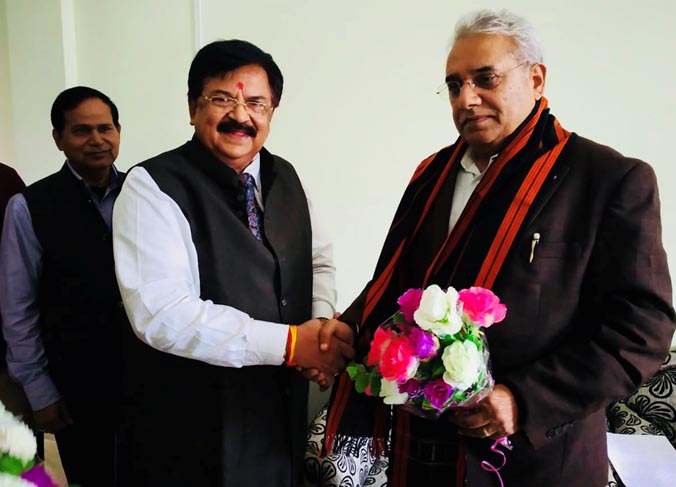 Dr. Markandey Rai is a former staff of the United Nations Human Settlements Programme (UN-Habitat). He  retired as the Chief of the U.N. Inter-Agency Coordination, Global Parliamentarians and Trade Unions programme of UN-HABITAT based in Nairobi, Kenya. He has served UN-HABITAT on various positions in the last twenty-two years of his service to the United Nations. He was recruited in 1992 to develop Urban and City Statistics. He was pioneer for establishing Global Urban Observatories and publications of the Compendium of Human Settlement Statistics and Atlas periodically. He is a Ph.D. in Statistics and has taught in many universities before joining UN-HABITAT in January 1992. He has represented UN staff at Nairobi (UNON) in various capacities for many years and he was elected President of the Nairobi Staff Union 2000-2003. He was also the Chairperson of the Joint Advisory Committee (JAC) at Nairobi to advise the Heads of the UN offices at Nairobi (UNON) on the matters of the staff administration and welfare. He has written and published several academic and scientific papers as well as publications of UN books related to urban issues. He has widely travelled and attended several conferences of scientific as well as of political nature. He is life member and elected office bearer of several academic, cultural and social bodies in the world.  As focal point for the Asia-Pacific region and also for India in UN-HABITAT, he achieved to organize a ministers forum for Asia-Pacific countries in December 2006 in New Delhi successfully and India became the Chairperson and permanent secretariat was established in New Delhi.

Dr. Rai was the President of the Global Organization of People of Indian Origin (GOPIO) in Nairobi of Kenya chapter. His biography was published in the 14th edition of Marquis Who's Who in the World in 1997.

He has been honored with "Hind Rattan Award in January 2006 in New Delhi. He is an "Ambassador for Peace" conferred in March 2009. He has also been recognized for meritorious achievements by several prestigious forums and organizations internationally including by the International Biographical Centre of Cambridge, England; Global Peace Foundation as a member of the Global Leadership Council and elected Board member of the Global Peace Youth Corps (GPYC), Africa. He has been awarded Humanity Achievers Award 2014. Recently in March 2017, Dr. Rai was elected the President of Global Peace and Development Service Alliance (GPDSA) in Global Peace Convention of GPF in Manila. He is currently the Chairperson of an Accreditation Board of BMO of NABET under the Quality Council of India. He is also State Chancellor of IAEWP (NGO accredited with UN-ECOSOC, UNDPI, UNESCO, UNICEF) for NCT of Delhi and the Executive President of the World Spiritual Parliament.

He has the honor to address a number of Parliaments and Global Parliamentarian's Forums. He is holding many prestigious and honorary positions in India and abroad and focusing mainly on Sustainable Urbanization, Youth and Women Empowerment through Youth Vocational and Leadership programmes. 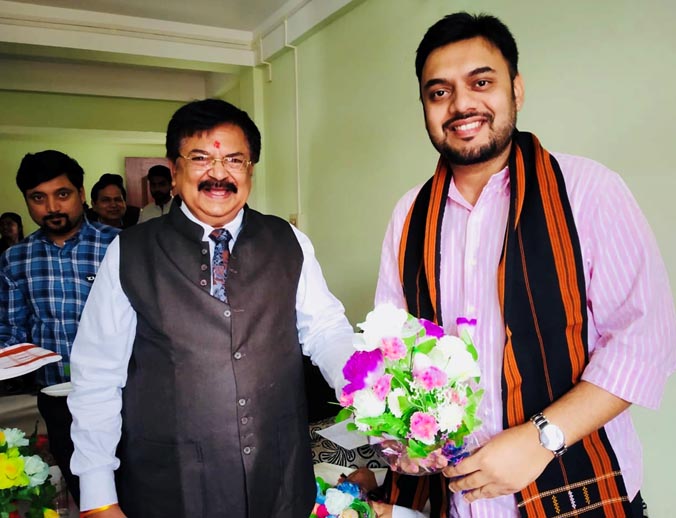 Dr. Utkarsh Sharma has been the Director and Member Secretary of the National Institute of Cleanliness Education and Research (NICER), AfroAsianAmerican Chamber of Commerce, Occupational Research and Development (ACCORD). He was sponsored by his parent organisation KPMG for undergoing the specialized Executive Development Programme at the Indian Institute of Management, Lucknow where he learnt the art and science of management and administration besides appropriate techniques for bringing productivity and efficiency within and outside the organization.

He has successfully designed a masterplan and a new paradigm for developing the resources and infrastructure in different States in general and in the State of Bihar in particular. As the Chairperson of the Bihar Rural Empowerment Agency for Development (BREAD), he has successfully edited a volumnous Book titled "Bihar : Past, Present and Future" which was released by the then Education (HRD) Minister of Bihar. As the Director and Member Secretary of the newly established transcontinental organization namely, "AfroAsianAmerican Chamber of Commerce, Occupational Research & Development (ACCORD)" and its constituent unit "National Institute of Cleanliness Education and Research (NICER)", he has been successfully organizing the need based seminars, symposia, conferences and summits for locating a critical path for solving the burning problems in all the countries in the Asian, African and American continents with a view to providing employment opportunities to the young boys and girls in these countries. Recently, the Book "Tripura : Past, Present and Future", produced under the aegis of ACCORD was released by the Governor of Tripura during the Commerce, Occupational Research & Development (CORD) Summit held at New Delhi the presence of the Representatives and Diplomats from many countries. He has visited many countries including USA from where he has collected relevant information on occupational research and development with a view to successfully implementing the vision of the Prime Minister of India regarding skill oriented training and development for ensuring entrepreneurial leadership as well as managerial competence.

He has received many awards and appreciations for his outstanding contribution in the areas of training and development, organizational research, mother earth protection, clean India campaign, sanitation education and hygiene related projects in selected schools, colleges and universities.

The National Institute of Cleanliness Education and Research (NICER) is all set to reach the new heights and milestones with a view to implementing the Swachchh Bharat Abhiyan by organising Certificate, Diploma, Post Graduate Diploma, M.Sc., Ph.D. and Post Doctoral Programmes in the areas of Cleanliness, Hygiene and Sanitation Education for ensuring right solutions for the problems like water quality analysis, monitoring and surveillance, water and sanitation related diseases, public health, gender equality and all other aspects related to cleanliness.