New Delhi, 23 May 2018 : Dialogue India sponsored Education Conclave held at the Indian Institute of Technology (IIT), New Delhi declared The Global Open University Nagaland (TGOUN) as the Best University of the Year Award in the area of curriculum development and instructional material preparation. The glittering full day programme was attended by a variety of intellectuals from all over the country. 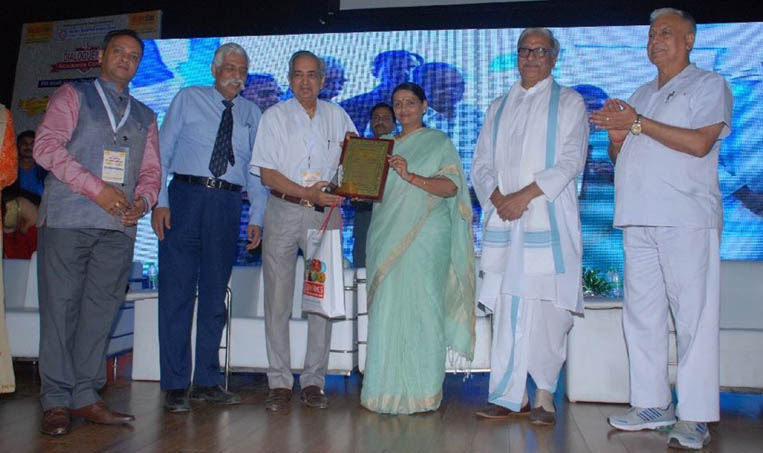 The Pro Chancellor of The Global Open University Nagaland Dr. S. N. Pandey receiving the
Best University of the Year Award in the area of Curriculum Development and Instructional Material Preparation
at IIT Delhi by Hon'ble Smt. Krishna Raj, Union Minister of State for Agriculture and Farmers Welfare,
Government of India.

After receiving the Award, Dr. S. N. Pandey, Pro Chancellor of The Global Open University Nagaland while discussing and responding to the Award said that all efforts will be made soon to make this university a world class university by launching new projects and programmes specially in the area of mental health, drug de-addiction, yoga, naturopathy, paramedical sciences, counseling, psychotherapy etc.

An exhibition was also organized on this auspicious occasion to promote technological innovation in higher education where many educational institutions including universities and colleges from across the country displayed their technological innovation. These institutions have displayed their original and new technical ideas as models. The institutions participating in this exhibition included IIT Delhi, Riviera Mobile, Era Lucknow Medical College and Hospital, Lucknow, SCMS School of Engineering and Technology, Krishna Engineering College, RC Patel Institute of Technology, KCG College of Technology, Dronacharya College of Engineering, GLA University Mathura, Mehr Chand Polytechnic, Eastindin.

Representatives from all these institutions displayed their technical efficiency and innovation. Awards were given to the institutions performing best in the exhibition. Two third prizes were given to KCG College of Technology and SCMC School of Engineering, and a second prize to the Era Lucknow Medical College. The exhibition of their various projects was also organized by the students of IIT Delhi in this program. About twenty students displayed their projects.

During the inaugural, technical and valedictory sessions, the scholars and academicians from all over India expressed their views on various topics. In the inaugural session of the program. Besdies MP Ramesh Vidhuri, was the Chief Guest. He emphasized value-based education by telling the distance between education and degree. He emphasized on self-disciplinary approach. At the same time, he told the various steps taken by the Modi Government in the field of education. In the first session, Archana Dutta, former Director General, Doordarshan, Dr. Kamal Tawari, Former Secretary, Government of India, Prof. SK Atreya, IIT Delhi, Prof. V.K. Goswami, EX- VC Sunrise University, Sangam University, VP Asian Academy of Film and Television, Shri Pawan Sinha, Spiritual Guru, Need for improvement in higher education in India i.e., The Need of Wake up India for Reform and Transformation in Higher Education, Wake Up India: Innovate, Manufacturing, Globalization, presented their views on the subject and needed improvement in education Emphasized Along with changes in the present form of education, emphasis has been laid on improving primary education from primary level. Prior to this, Dialogue India magazine's group editor, Anuj Agarwal, told the need for this conclave that he was very disturbed to see this form of education in the private sector, and the scams in the name of education used to churn his mind, he also felt the lack of communication. Communication between government institutions and private institutions disturbed him, and this is why he came with this form of conclave. And this year he got the support of IIT and AICTE, and this form of conclave emerged. There are three different aspects, the first is the discussion on the burning issues in the field of education, the second is the new projects by the students and the third presentation on the technical and innovation paper presentation.

The second session was on the role of private institution promoter / owners in quality foreign education and innovation, in which commander VK Jaitley, eminent journalist Mr. Ved Pratap Vaidik, Maj Gen Dilawar Singh, Professor Navin Rampal, and Prof. IIT Roorkee. Sonal Atrey and Mrs. Sheila Tawari were the speakers. The role of private education providers in this session was discussed in detail. And many important ideas came to the solution of the challenges faced by them.

According to Shri Vaidik ji, there is a time for change in education and the time for revolution for education has come. It is time to start a movement in the field of education.

In the last session, Union Minister of State for Women & Child Development, Smt. Krishna Raj was the Chief Guest. She also emphasized the re-establishment of Indian values. Congratulating Mr. Anuj Agrawal, the group editor of Dialogue India, she also congratulated the magazine on the ranking of private institutions. Mrs. Krishna Raj said that such programs should continue even further.

All guests in the program were welcomed by the group editor of the magazine, Anuj Agarwal and Managing Editor Dr Sarika Agarwal.

A part of the conclave was also a paper presentation on technology and innovation. More than 30 papers were presented from various institutes from all over the country on technical and innovation. Several other institutions including Sandip Foundation Sejaul and Birla Institute of Technology Meresa, YMCA Technical University, Faridabad, Annamalai University, Chennai and many other institutions participated in this paper presentation and presented new and original ideas through their papers.

The ambassador of various countries also joined the program. The victorious contestants of exhibition received their winning cheques by Palestinian and Slovenian ambassador Mr. Faik H.H. Hamza and Boris Jolosvik.

In the program, the mesmerizing presentation of a dance drama was given by Kathak dancer Anu Sinha’s group, and it was based on the famous work of Jai Shankar Prasad Kamayani. There was also a session that all the suggestions should be given to Government. At the end of the session Managing editor Dr. Sarika Agarwal and group editor of the magazine Anuj Agarwal expressed gratitude to all the guests and expressed commitment on continuing such dialogue.