New Delhi, 5 June 2018 : The Book titled "The Challenges of 21st Century" with separate volume on "Global Peace, Youth Empowerment and Environment" and Sustainable Urbanization was released by Dr. Jitendra Singh, Union Minister at the Prime Minister's Office besides being the MoS for the Development of North-Eastern Region, Personnel, Public Grievances and Pension during the inaugural session of the National Environment Convention 2018 organized by the Indian Institute of Ecology and Environment (IIEE) coinciding with its 38th Anniversary held on the auspicious occasion of the 47th World Environment Day. 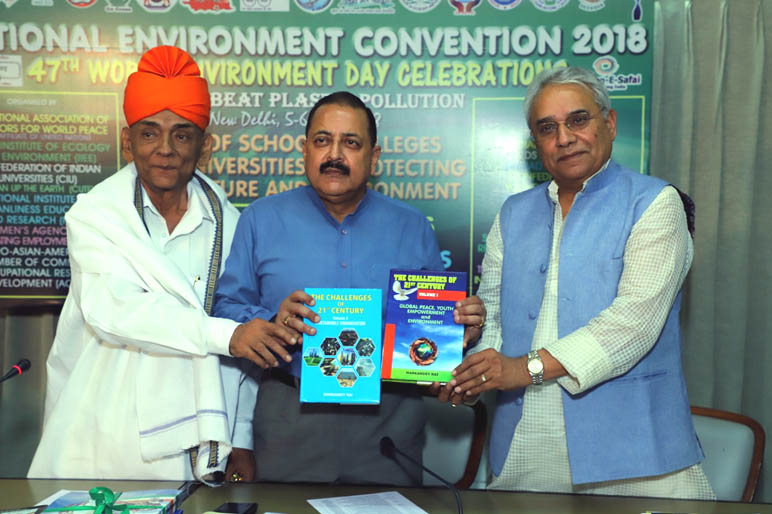 Dr. Jitendra Singh, Union Minister at the Prime Minister's Office besides being the MoS for the Development of North-Eastern Region, Personnel, Public Grievances and Pension releasing the Book titled "The Challenges of 21st Century" authored by Dr. Markandey Rai in the presence of Chancellor Dr. P R Trivedi during the National Environment Convention 2018 held on 5 June 2018 at India International Centre, under the joint auspices of the Indian Institute of Ecology and Environment (IIEE) and National Institute of Cleanliness Education and Research (NICER) with delegates from India as well as other countries.

This Book was also dedicated to the world citizenry in the afternoon session by the Union Minister of Commerce and Industry Shri Suresh Prabhu. He appreciated the efforts of Dr. Markandey Rai, Senior Advisor, UN Habitat. He hoped that this Book will go a long way in helping the different Ministries in the Government of India specially in designing and implementing programmes relating to sustainable urbanization and the strategies for bringing peace on earth in the third millennium besides the need based action plans for protecting our environment with the help of younger generation.

The two-day National Environment Convention 2018 organized to discuss a new paradigm for beating plastic pollution will be deliberating on all facets of reusing and recycling of plastic wastes on 5 and 6 June 2018 in the presence of national and international delegates including the Ambassadors, High Commissioners and Ministers Counselors from different countries including Seychelles, Nigeria and Fiji. 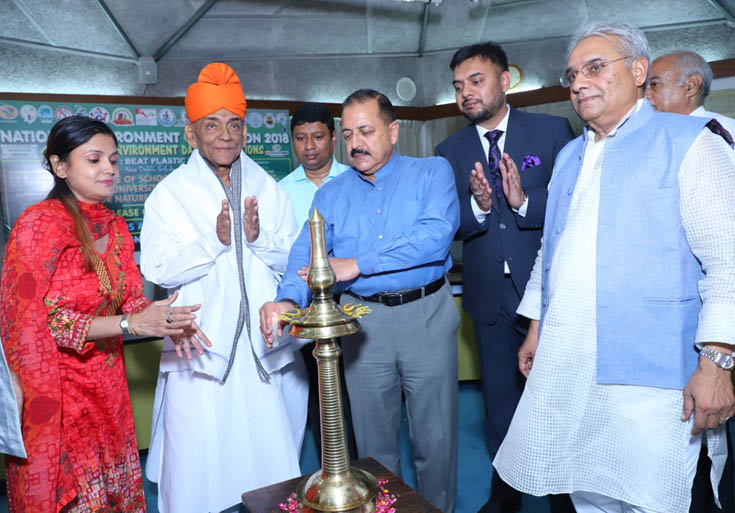 While explaining the Book, the Author Dr. Markandey Rai said that the Book "The Challenges of 21st Century" is published in two volumes covering the major challenges of this century namely the global peace, youth empowerment, environment and sustainable urbanization, which are the most eminent challenges among many. The first volume covers the first three challenges and the second volume of the Book is devoted to the fourth one on the Sustainable Urbanization. This Book is not only discussing the challenges but also proposes and provides some possible solutions as well. This Book is mainly a collection of thoughts; speeches and research papers published and delivered on the various forums during my work for more than two decades with the UN-Habitat at its headquarter in Nairobi, Kenya, East Africa, Dr. Rai added. 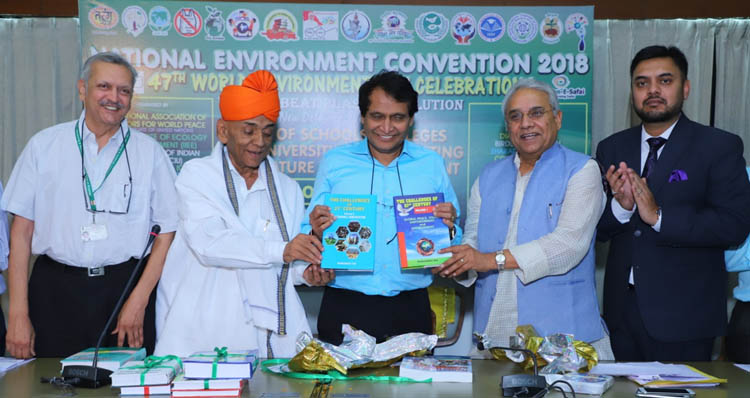 As we are witness that in spite all the attempts, there are several conflicts and wars including civil wars in various part of the world, which may escalate and trigger to nuclear war any time and it may take the shape of another world war. It is the wish of almost everybody that peace should prevail in the world. The United Nations was created in 1945 to save the successive generation from the scourge of war because the 20th century had witnessed the destruction and loss of life and property due to two world wars. However, global peace is a great concern to all as it was before the creation of the United Nations in October 1945. It is commonly said that if we are the problems then we are the solutions also. The book describes that the solution lies in the ancient Indian philosophy of "Vasudhaiv Kutumbakam" means we are one family of God and God is one but we call by various names. The whole humanity is one tribe and spiritually will keep us united, Dr. Rai further added.

Youth empowerment is in the mind of everybody but little has been done and much more is needed to be done otherwise it is deterrent to the achievement of the United Nations Sustainable Development Goals 2030 which has been adopted by the UN General Assembly in September 2015 and effective from January 2016. There cannot be better opportunity than this when the UN SG's slogan is that nobody should be left behind. Youth must be involved in the decision making process by the governments and the policymakers. The youth should be depicted as a positive energy, which should be used for the nation building and promotion of peace globally. Till now, they have been given only a lip service and false assurances but left to struggle and they have been leveled with bad names as troublemakers. The biggest question is how to provide employment and livelihood for youth? How to make them leaders of today and tomorrow? How to develop confidence in them and make them a responsible global citizen with a high moral character? How to make this demographic dividend useful and fruitful for the world's progress?, Dr. Rai explained. 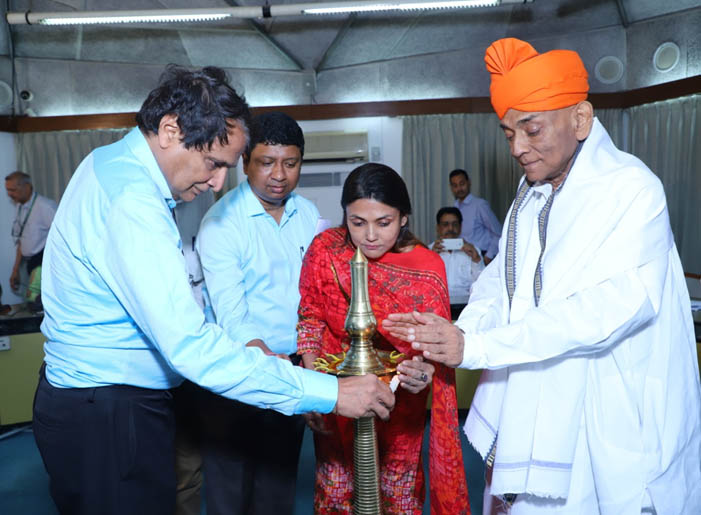 Further explaining the contents of the other volume of his Book relating to global peace, youth empowerment and environment, Dr. Rai said that environment is a great concern and climate change and global warming is evident especially in major cities and towns. Cities are becoming graveyards due to air pollution and poor services affecting the children, women and old persons alike and citizens are paying penalty for living in big cities.

Crisis of water is affecting the life everywhere and it is alarming. There is a need to be cautious and more training for awareness to protect our environment through adopting serious majors and changing our life style is demanded. More data to be collected and further research to be done on urban environment and competition among cities to keep them clean and green is necessary, Dr. Rai elucidated.

There cannot be sustainable development without sustainable urbanization. Cities are the engines of growth but at the same time they are biggest consumer of goods and polluters. 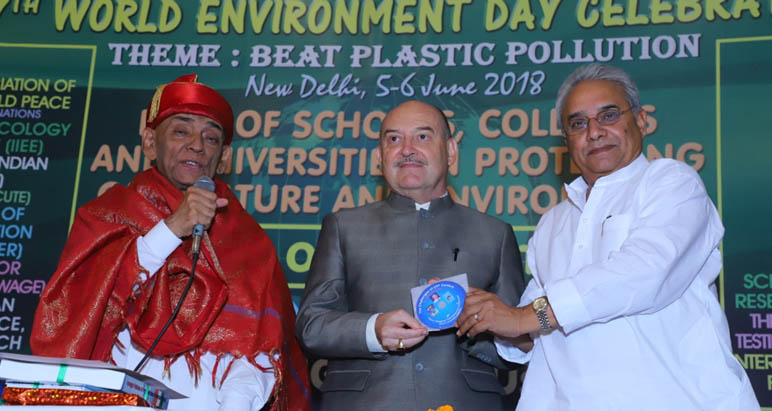 How to make cities livable where everyone man, women and children can live with dignity and not ashamed of; where everyone can enjoy minimum space, privacy, and protection; where all have access to safe drinking water and sanitation not to impair one's health and their children in the successive generations; where everyone can share a sense of pride in living, be they small villages or large cities, which are planned and developed through common efforts and for the common goods. Regional Ministerial forums especially the Asia-Pacific Ministerial Conference on Housing and Urban Development (APMCHUD) was created in 2006 to address the challenges of the sustainable urbanization in this region and to make this region a slum free with the provision of basic services of water, sanitation, educational and health facilities and which may cater the needs of women and children, young and old, poor and rich all inclusive, Dr. Rai finally opined.