The Indira Gandhi Technological and Medical Sciences University, Ziro, Arunachal Pradesh had convened a Regional Meet on Women, Nursing and Environment coinciding with the Fresher's Day today in the local Abotani Auditorium in the presence of hundreds of newly admitted students, their guardians and special invitees.

Inaugurating the Regional Meet, the Vice Chancellor of Rajiv Gandhi University (A Central University), Itanagar, Prof. Saket Kushwaha said that it is the duty of both public as well as private universities to take care of the vision envisaged by the Prime Minister Shri Narendra Modi with special reference to cleanliness besides skill development for the aborsoption of the trained students in the State of Arunachal Pradesh. 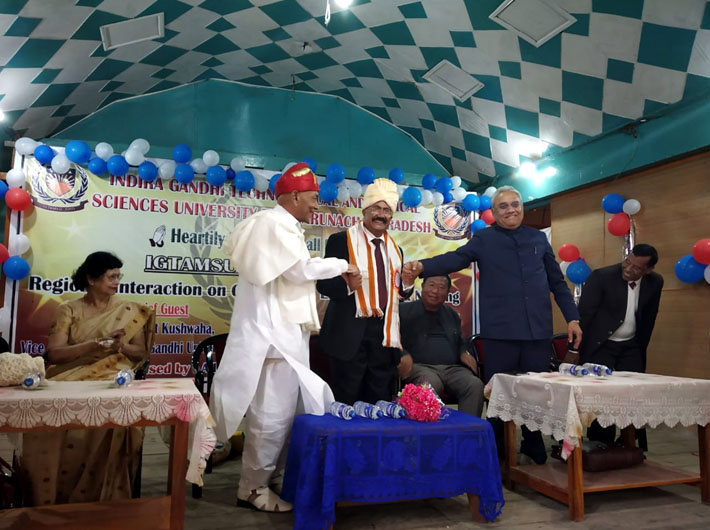 The Chancellor of Indira Gandhi Technological and Medical Sciences University (IGTAMSU), Dr. Markandey Rai announced many new experiments specially regarding new and innovative short term and long term programmes by having a benchmark survey of the need for skill based vocational courses viewing the availability of local talent for solving the problem relating to unemployment among the young boys and girls from Arunachal Pradesh. He also appreciated the efforts of the State Government for promoting need based and employment centric tertiary education in the State of Arunachal Pradesh.

The Founder Chancellor of Indira Gandhi Technological and Medical Sciences University (IGTAMSU), Dr. P R Trivedi traced the history and origins of IGTAMSU right from the year 2003 and thanked the successive State Governments and the Policymakers for cooperating with his organisation in giving birth to this University. He thanked the Chief Guest Prof. Saket Kushwaha for his initiative for proposing a Memorandum of Understanding (MoU) between RGU and IGTAMSU.

A lively cultural programme was also organised and performed by the fresh as well as the old students of IGTAMSU with the active guidance of the Faculty Members of IGTAMSU.

There was a public announcement at the end of the programme that on 18 November 2018, the University has decided to observe the Naturopathy Day based on the suggestion and advice of the Ministry of AYUSH and the Central Council for Research on Yoga and Naturopathy (CCRYN), Government of India.