Dr. PRIYA RANJAN TRIVEDI IS PIONEER IN PERCEIVING THE ROLE OF COMPUTERS IN GOVERNMENT

Inaugurating a national level Webinar on the Role of Computers in bringing productivity and efficiency in the Government Systems, the President of the Confederation of Indian Universities (CIU) and Chairman of the Institute of Information Technology (India) recalled that he had successfully organized a National Seminar on "Computers in Government" 35 years ago on 12th December 1985 which was inaugurated by the then Governor of Bihar Hon'ble Shri P. Venkatasubbaiah and attended by more than 300 experts of Computers and Information Technology from the Central and the State Governments besides Professors and other Faculty Members from selected Colleges and Universities from South Asia. 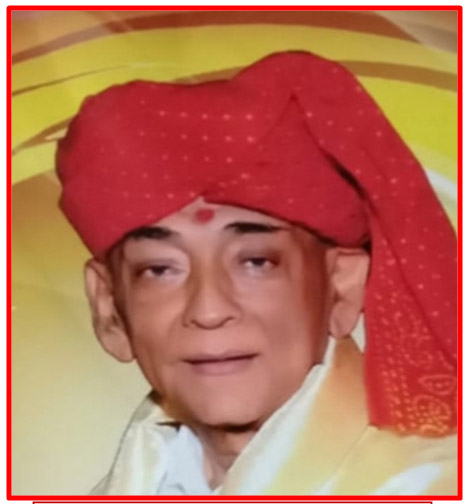 While presenting the theme during the deliberations on the effective role of computerization in bringing productivity in the Central and the State Governments, Public Sector Organizations, Dr. P R Trivedi stressed the need for preparing a competent cadre of hardware and software experts for taking care of the manpower needs by providing effective training in the areas of computer operations, computer programming, computer maintenance, computer applications, informatics, computing techniques etc.

The Governor Shri P. Venkatasubbaiah complemented the efforts jointly made by Dr. Priya Ranjan Trivedi and Dr. Uttam Kumar Singh, the pioneers in the area of computer education and training in the country who had imported latest computers way back in 1979 for the Department of Computer Sciences at the Indian Institute of Business Management (IIBM), Patna. 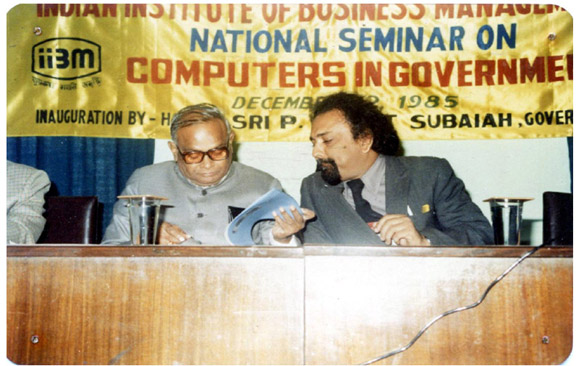 1985 : Dr. Priya Ranjan Trivedi (35) and the Governor of Bihar Shri P. Venkatasubbaiah discussing important issues relating to computerisation and its perceived effects relating to productivity in different Departments and Public Sector Organization under the Government of India and the State Governments.

Placing his views on the auspicious occasion of the 29th National Technology Day 2020, Dr. Priya Ranjan Trivedi said that developments in computing are driving the transformation of entire systems of production, management, and governance. He further added that computers are everywhere we touch, all day long. We still have an image of computers as being rectangular objects either on a desk, or these days in our pockets; but computers are in our cars, they are also in our thermostats, they are in our refrigerators. Actually increasingly computers are no longer objects at all, but they suffuse fabric and virtually every other material. We really need to care about what the future of computing holds because it is going to impact our lives.

Biological computing addresses how the body itself can compute, how we can think about genetic material as computing. You can think of biological computing as a way of computing RNA or DNA and understanding biotechnology as a kind of computer.
The future of computing as a convergence of the biological, the physical and the digital (and the post-digital quantum), using as examples 3D-printing, biotechnology, robotics for prosthetics, the internet of things, autonomous vehicles, other kinds of artificial intelligence, one can see the extent of how life will change. There is a need to make sure that these developments benefit the entire society, not just the most wealthy members of society who might want these prosthetics, but every person who needs them.

Forecasting the state of computing by 2030, he said that most of us have no idea yet because change is happening so quickly. We know that quantum computing - the introduction of physics into the field of computer science - is going to be extremely important; that computers are going to become really, very tiny, the size of an atom which is going to make a huge difference; nano-computing, very small computers that one might swallow inside a pill and that will then learn about the illness and set about curing it; that brings together biological computing as well, where one can print parts of the body. Everybody is going to see the increasing infusing of computing into all aspects of our lives.

Dr. P R Trivedi finally opined that his organization : Computers (India) Limited and the Institute of Information Technology (India) in association with the Buddha Institute of Technology will continue researching on also an important aspect of computing by using computers and information technology tools and techniques for online education and training viewing the disastrous effects of COVID-19 which is compelling the Government of India and the State Governments to keep the Institutions, Schools, Colleges and Universities closed for an indefinite period in order to save the lives of the students and the teachers. Such developments in the area of computing will make it easier for the students to learn almost everything with the help of their computers, laptops, cellular phones, mobile devices etc.